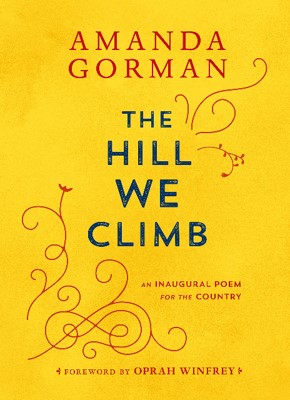 It is poetry month in the US, so I thought I could make a review about a special poem from Amanda Gorman.
I got “THE HILL WE CLIMB” from the Easter bunny.
Amanda Gorman became the youngest inaugural poet ever. She performed her poem at the inauguration of Joe Bidden earlier this year. I really liked the poem so I definitely wanted to share this little book with you.

In her poem Amanda writes about herself: a young black girl, raised by a single mother, who’s ancestors were slaves and now she can dream of becoming president one day. She also writes about the problems people in this country are having with each other and ideas on how to bring them together again. The poem is a lot about HOPE and UNITY.

This is my favorite passage:

Black people are often not treated the same only because of the color of their skin. Amanda recently had to feel that herself. Despite being famous a police man didn’t believe her that she was living in her house that he was guarding, just because she was black. When he found out that she had a key and he was wrong, he didn’t even apologize to her!

In my family it doesn’t matter if you are black or white or anything between, if you are religious or not religious but it matters to be a great and caring friend.

How did I like the poem?
I totally enjoyed the poem from start to end and it was really inspiring.

Who is this poem for?
This poem is for everyone from young to old.