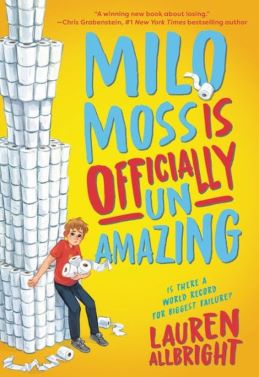 Why would you have a paper towel tower in your livingroom? Dozens of paper planes trying desperate to get the longest throw? Or dress up as a cockroach in the middle of a stadium? Well, Milo and his parents did all of that because it was the family’s dream to get a Guinness World Record. Unfortunately every time they tried, they failed. Is there an award for the most failures? If so, Milo’s family would definitely win this one.

But just before Milo got humiliated in front of the whole school he had an idea. Why not turn all the failed projects into something good. He builds a gigantic volcano out of the materials they used for all their failed attempts. Will this be enough to finally make a noticeable record?

How did I like the book?
I liked the book because it was very funny and Milo never gave up.

Who is this book for?
This book is a book for kids 8 years and older.